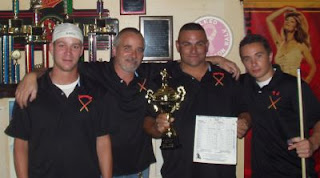 Jeremy, Bobby, Jonny, T.J.
Now, let me preface my comments about the first-ever Hayloft-Barrelz Challenge Cup Match by saying my observations on said match may not be entirely accurate as I was heavily medicated at the time which also accounts for the fact that I couldn’t make a shot.

Unfortunately, I did not have a corner on problems interfering with performance at the table. Boogie, our number three player, was playing on short notice and hadn’t had time to put himself in the proper frame of mind. Billy “The Kid” Cook, our anchor, had been to a Rays game the night before sitting in seats so far removed from the field of play that he had developed eye-strain. Jimmy, a last minute addition to the squad who nearly made the eight on the break in two games, was victimized by bad roll after bad roll. As for me, I was heavily medicated as I may have mentioned before.

In the lead-off position, I missed what should’ve been easy position and managed to give the first game away. I think I followed suit with my second game, though, like I said, much of the happenings were obscured by a medicinal fog.

Heading into the match, I figured, if Billy and Boog won four games each, then I would only have to win one to cinch the match. That being said, I held up my end while my two amigos fell short. Jimmy was just there to fill out the roster so he shouldn’t be held accountable in any way for the massacre.

Barrelz, on the other hand, was living the charmed life – they didn’t get a single bad roll, nor did they have any medical emergencies. That’s the way it goes some times.

The Barrelz four - Bobby, T.J., Jeremy and Jonny – have sworn to give us a chance to get even though it seems, now, the Port Hole team has injected itself into the mix. We’re looking forward to a renewal of the competition, though we would hope they set things up for a day more hospitable to our side.