The Jackhammer Break Cue - A Tale of Gullibility

I just received the new jump/break cue I found on ebay, an Aska Jump Break AR Professional, which reminds me of the last jump/break cue I bought via that vast shopping mall, The Jackhammer. 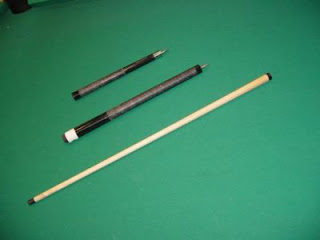 The Jackass's Jackhammer
What’s with the name, anyway? Obviously the name Jackhammer was supposed to bring to mind another popular break cue, The Sledgehammer, which sells for around $300. The Jackhammer sold for considerably less. Yet, while both names conjure up powerfully destructive images, the power is delivered primarily vertically, not along a lateral path as a cue might traverse. Perhaps, Battering Ram would be a more apt moniker.

Anyway, I was taken in by the whole Jackhammer thing and soon paid the price for my gullibility – my Jackhammer turned out not to be worth jack shit. The “special” phenolic tip/ferrule chipped and cracked in half in short order. I had already given the seller positive feedback on the basis of the cue’s appearance, so I figured I was stuck. I got what I deserve – I was a Jackhammer jackass. 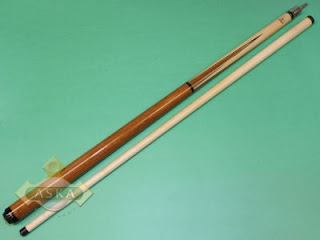 Aska Jump/Break Cue
So, somewhat inexplicably, when I again needed a jump/break cue, rather than going to my own break cue page, I again took a trip to ebayland. The Aska Jump/Break Cue sells for $109. It has a nice look, a solid feel, and, what’s more, it comes from Canada. I’m hoping our Canadian brethren have more scruples than those sellers dumping the Jackhammers on an unsuspecting public. I'll let you know how it holds up.
Posted by Ace Toscano at 5:51 AM

Your going to keep getting what you pay for. Quit buying break jump cues and buy a break cue and then buy a jump cue. Lucasi has nice, well priced, jump cues.

Got a Jackhammer as a gift phenolic tip broke off instantly. Had local cuemaker replace it, it actually worked well. Then put a samsara jump/break tip i highly reccommend these tips. I've had afew people try and buy it. i tell them its a cheap chinese cue but it hits extremely well,i keep expecting it to shatter in pieces, two and half years later I still use it 3 times a week. Go figure!!!