Our team, wearing the Hayloft colors, consisting of Boogie, Billy Cook, Craig and yours truly were declared league champions for the winter session. And, once again, I was awarded a trophy as the league’s individual male points leader. Here’s my acceptance speech for the male points leader award: 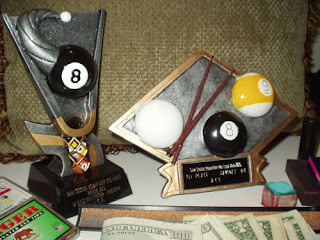 Left: Individual Points Leader; Right: 1st Place Team
“Thanks, everybody, I appreciate the applause. This trophy means a lot to me, not only because it was hard-fought, but because, realistically, with Billy Cook back from , it could very well be my last. But, hey, there’s nothing wrong with second place, is there Billy? (more applause) Anyway, seeing as I only won by seven points overall, I guess I can thank that 31 point night I had early on for clinching first place for me.
But, as proud as I am of coming in first in the individual points race, I’m prouder yet of the way I played – I never tried to shark anybody by jumping off my stool when they were trying to shoot; I always made an honest effort; and I always played by the rules. Though I can’t say that about all of you who have made it here tonight, (laughter) I can say it about a lot of you. And I just wanted you all to know that, regardless of how many games you won, or what place you came in, if you played by the rules and were a good sport, you have my respect and my friendship. Thanks for making this league fun for all of us. (applause) As for the rest of you - the cheaters, crybabies, sharks, and whiners - maybe you can find another league somewhere. (more laughter) Peace, love and peyote.”
Posted by Ace Toscano at 6:17 AM