The Problem With Florida’s Pool Rooms 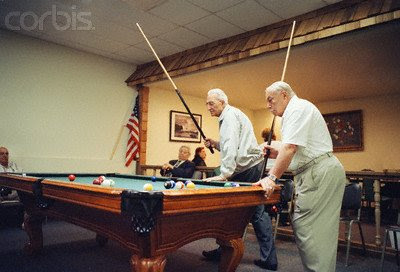 Well, it’s no secret – the biggest problem with Florida is old people. Sure, they bring their money when they come, but they also bring their declining health, their withered bodies, and their eroding mental faculties. Thanks a lot.

I have one friend who has endured constant pain for the last 5 years and several operations on his neck and spine as the result of one miserable old-timer’s inability to control his vehicle. The old geezer shouldn’t have been behind the wheel but no one in Florida has the guts to take a license away from an elderly person. The last time I had my license renewed, I went to the license bureau and, while I was waiting for my turn, I witnessed an exchange between an old man and the girl who was giving him the eye test. “Can’t you see anything?” she asked, exasperated. “No,” he answered. “Okay, okay,” she sighed. Then she cleared him for renewal. This is what we have to deal with.

I haven’t played golf in 6 years because the courses around here are littered with slow moving geezers who can’t play a round in less than 5 hours.

Well, as odds would have it, a certain amount of these fogies find their ways into the pool rooms. I was down Hammer Heads yesterday afternoon, minding my own business, banging the ball around by myself, when the guy at the next table accused me of slipping over to his table during his absence and stealing his cue ball. Now, this guy is a well-known asshole. The last time I was down there, a week ago, he picked up my friends cue case from a table where it was lying and threw it onto the floor because according to him it didn’t belong there. Now, I’m pretty sure this guy suffers from OCD. He can’t start playing before he puts all the surrounding furniture and knickknacks in their customary places. He even has to put all the TV’s on particular stations. He used to drop into DJ’s occasionally, but the players there soon got tired of his constant complaining nicknaming him McNasty.

Anyway, I told him I didn’t take his cue ball, and that I had no interest in it. I had been playing with a red dotted measles cb that the girl who handed out the balls had placed in the tray. I didn’t ask her why she did it. I didn’t care. But, old McNasty cared deeply. So, I traded cue balls with him to make him happy. Still, unconvinced of my innocence, he later complained to a friend of mine, Bob May, that I had stolen his cue ball. He oughta be locked up in a home some where.
Posted by Ace Toscano at 7:41 AM

Thats a funny story man :) glad we dont have oldtimers like that here in denmark :=)
pool is a gentlemans sport and we should threat all players with respect :=)

Hello there,
I am Peter Robert Casey and I am a basketball columnist. I have initiated an idea to create a sports blogroll where bloggers from all sports disciplines could participate. All you need to do is to add my blog link to your blog and i'll do the same. That way, we could have a mutual partnership and we could refer visitors to each other's blog.
Please let me know if you would be interested.