The Rat Gets The Cheese 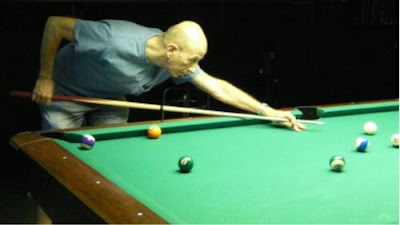 Like lab rats trained to navigate their ways through a maze, pool players can also benefit from repetition. Note that I said “can” benefit and not a definitive “will.” The exceptions, of course, and I’m sure you know someone who fits into this category, are those who bang the balls around meaninglessly, even on a daily basis. Practice must have some kind of purpose. The more purposeful, the more benefits a player will reap.

I got off on this tangent because, at 61, I find that I’m still improving. In fact, I came in second in a tournament last week, opting, at 1 AM, to split the pot with Mr. Hot Seat rather than play it out. He had beaten me in a hot seat match that went hill-hill and I really didn’t have the juice at that hour to do it again. Anyway, he’s better than me and one of the best players on the west coast of Florida. So, I found it satisfying when he later told me that he had never seen me play better.

Of course, I have played better, but that was 45 years ago and, as much as I hate hearing others talk about how good they used to be, I don’t like bringing up my former level of proficiency. I mean, anyone, even a refugee from the Moose Club can come into the pool room and start bullshitting about how good they used to be, true or not. In most cases, their stories are purely fabrications. I mean, you can tell by how a player looks when he’s playing, by his technique and form, even by his mannerisms, if he was ever an approximation of a pool player.

That being said, I really was a pretty good player at age 16. Straight pool being my game of choice back then in the early 60’s, I routinely ran 40 and 50 balls and might have run more except in games to 50 opponents normally didn’t want to pay for any added indulgence. To compare myself to that sharp shooting kid, publicly or just to myself, is a little depressing. I mean, right now, all that matters is how I play today. What would be the purpose of telling someone how well I used to play? Might I scare them into submission?

Anyway, it’s probably seven years since I took up the game again after a 38 year hiatus. I have friends who, regardless of how long it’s been since they played last, could step up to the table and play just about as well as they ever did. That was not the case with me. I stunk. But, I stuck with it and little by little I got better. I tried this and I tried that. You know how it goes.

Lately, I’ve been making it a practice to go to the pool room every day and shooting balls, even if it’s only an hour. Unless, I have someone to gamble with, I prefer to bang them around by myself. I concentrate on staying down, stroking through the ball and hitting my aim point. Based on recent comments, it seems to be paying off.
Posted by Ace Toscano at 5:23 AM