I was playing one day when it occurred to me that my stick lacked the slick smoothness that I prefer. It felt rougher than grandma's broomstick. Though I noticed the network of nicks and dings all of a sudden, they were, more than likely, an accumulation of several months of bangs and knocks. A few days later I decided it was time to clean up my shaft.

Now, I refer to the procedure I follow as "country style" because it is not likely to please those cue worshippers who handle their sticks like an English doctor might handle Prince Charles' unit -- very carefully. I mean, I've heard repeatedly from different players, especially those who like to give advice via the internet, that they would never let sandpaper touch their cues. Me, I love sandpaper. I think it's pretty handy stuff. And, it plays an important role in my method of eliminating nicks. Others would probably warn that my method could cause shafts to warp. All I can say to that is it's never happened to me and I've been cleaning up my shafts this way for a long time.

. I usually find this in the same section of a department store where they sell spray paint for cars. 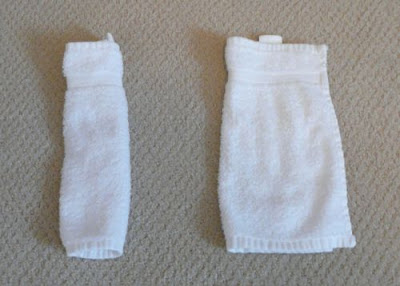 Washcloths
During my most recent refurbishing, I started at the tip end of the shaft and worked my way up to the joint. You might be able to tackle the whole length of the shaft at once, but I prefer to work my way up over a matter of days.

You fold the washcloth so that it roughly conforms to the location of the nick. If you have two or three nicks that are close together, you may want to fix them together. Next, you wet the bottom third of it with hot tap water, squeezing out the excess water so that the cloth is good and damp but not dripping. Then, you press the wet end against the ding and roll the entire cloth tightly around the shaft.

Set the shaft aside and check it out tomorrow. If, as is usually the case, the nicks have vanished, you can then thoroughly dry the worked-on area by rubbing it with the cotton cloth. Then, hit it with the sandpaper. Voila - you're back in business.

Now, if you want your sticks to last forever, this method is probably not best for you. But, if you don't give a crap about forever and just want to get rid of the nicks, give it a try.

Note: I ran into Freeak-Zilla Bill at the pool room today and had the opportunity to watch him employ the method referred to in his comment first hand. I'd be willing to bet a wad of hundreds that his method is a lot better than mine. First, he wet a paper towel, squeezed out the excess water and nuked it until it was hot, but not too hot to handle. On this day, he deemed 20 seconds to be enough. First time out, play it safe - if the paper towel isn't hot enough, you can always give it another ten seconds. He removed the paper towel from the microwave and applied it directly to the nick for two or three minutes. Then, as he stated in his comment, he completed the process by vigorously rubbing the area with a dry paper towel, rubbing until the area was dry. Voila! In less than 5 minutes, the dent was eliminated. He fixes bigger nicks, chips or dents that won't succumb to this method by filling them with a drop of super glue gel, allowing the glue to dry for a few days, then sanding the spot smooth. I can't wait till my shaft gets nicked up again, so I can try his method out. LMAO!
Posted by Ace Toscano at 12:23 PM

Good morning was just reading your advice and I had never heard that method before. Thanks Ron

I will try it

Ace,I have used this method many times with paper towels making them scalding hot in microwave wrapping/sweating for only 10 min.then vig rub w/dry paper towel.If the dent is to deep or small wood chip missing I put a single drop of good quality super glue [gel] let dry for days sand smooth can't see or feel it.bill aka Freak-zilla

Ace, I have done this before using the microwave. This works great on regular shafts, don't do this on a Predator or OB shaft. they can come apart.Anyway great advice.

Its not new but still useful for the new users. Good job.