GEAR: What’s in your case and why?

PoolSynergy's theme this month calls for their esteemed network of pool bloggers to examine their cue cases and explain, if they can, the odds and ends they carry around in them. The topic struck me as one that wouldn’t strain my limited mental resources, so I decided to contribute to the discussion. You can find the complete list of contributors at The Tip Jar, the site of this month's host Samm Diep. 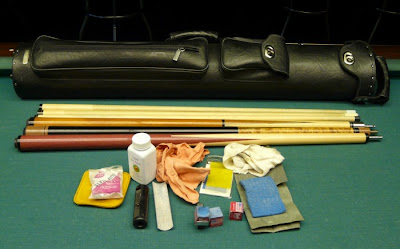 Before I get to what’s in the pockets and pouches of my 3/7 Instroke cue case, let me say a quick word about pool cues in general – they ain’t magic wands. Frankly speaking, I played the best pool of my life, back in the 60’s (that’s 1960’s, not the 1860’s), with a spruced up one-piece house cue. Of course, I never played badly back then, but, if I had, I never would have thought of using the cue as an excuse. I mean, it was straight and it had a tip on it – what more could a guy want?

Back then, strangers carrying their own cues would occasionally invade our suburban New Jersey pool room, but we were not terribly impressed by their lacquered finishes or their fancy inlays – I guess we didn’t get it. Fact is we viewed these intruders with more than a little suspicion. Figuratively speaking, we were all dressed up in jeans and in came these guys decked out with more ruffles than Little Lord Fauntleroy. Know what I mean?

Anyway, fast forward to when, after a 38 year layoff, I started playing again back in 2000. I soon discovered there wasn’t one decent stick in the game room of the old fogies’ trailer park where I reside. So, I went shopping. Finding Kmart was out of their quality implements, I boogied down to Sports Authority where I found a stick for twenty bucks. It wasn’t all that but it was plenty good enough for a guy who could barely hit a rail. By the time I realized it was a piece of crap, I had been carrying it to the local pool room for over a year with no pangs of conscience whatsoever. When I did decide to upgrade, I went online and bought myself a $55 Players cue stick. I still have it, somewhere. I used that for a few years and, then, graduated to a $200 Falcon sneaky-pete. I liked that stick well enough, but, for no good reason, a year later I decided to get myself a custom made Josey sneaky which I’m still using. With it, I carry two other sticks: an ASKA break-jump cue I found on ebay and a 1990's vintage Meucci. I hardly ever use the Meucci; I just carry it around.

All that said, I’m still a firm believer that if a person can play, he or she should be able to make do with any kind of stick, including a broomstick. But just like golfers who invest in $5,000 clubs and still can’t break a hundred, there are a zillion poolplayers out there with $2,000 cues who can’t hit a rail. To each his own. Moving on… 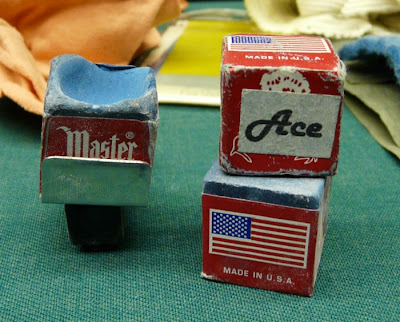 There’s chalk in my case, plus a magnetic chalk holder. Chalk generally isn’t an issue at area pool rooms, but our local bars usually opt for that cheap gooey stuff they sell in Wal-Mart. If you want to use Master Chalk, you better bring your own. The danger, then, is that someone will hijack your chalk and claim it as their own. I had returned to my place at the bar after winning a match in our local bar tournament one night, when a guy came charging over and asked, “Did you take the Master Chalk that was on the back table?” I reached in my shirt pocket, flashed the chalk at him showing him the name sticker I had placed on the bottom of the cube and stated simply, “It’s mine.” Desperate times call for desperate measures.

Because I’m a bit of a germaphobe and don’t like sharing chalk with people who are sniffling and sneezing and otherwise snot-filled, I occasionally pull out my magnetic clip-on chalk holder. Of course, this is mostly a symbolic gesture since the infected one’s germs are crawling all over the balls, the rack, the rails and the cloth. That reminds me – it’s time for my flu shot. 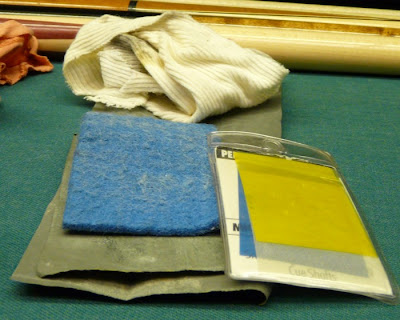 I like a slick shaft and I carry several items that contribute to that end. I have talc in a plastic bottle and talc in a Slyde-Rite bag. I’ve got one of those blue scouring pads. I’ve got the Smooth Micro-Burnishing system plastic squares. I’ve got a few pieces of 2000 grit sandpaper, plus a leather pad and a couple small pieces of cloth for wiping down a dirty cue. I’m usually too lazy to dig one of these rags out of my case and opt instead to use my handkerchief. I know there are those who are of the opinion that you should never sand your shaft. I suspect they are afraid that repeated sandings can transform a shaft into a crooked, pencil thin wand. Good luck with that. Me, I’m a sander and a scourer. If, somewhere along the line, my shaft becomes too thin or crooked, I’ll get a new shaft or, more likely, a new cue. 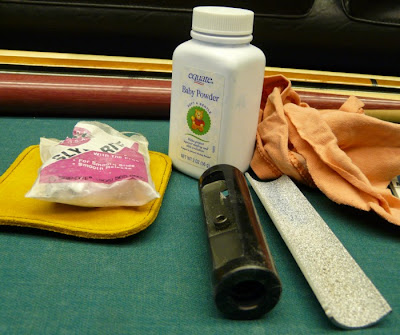 I also have a steel version of the cue tip sander we’re all familiar with. More like a file, it works great, never needs new sandpaper, and, if necessary, could probably double as a parmesan cheese grater. The Porper Cut-Rite tool comes in handy to shave the sides off mushrooming tips.

Thinking about it, I could probably get by with just the talc. Plus, a little sandpaper. And, maybe, the file and those Micro-Burnishing squares. The Porper tool comes in handy, too. Hell, I might as well keep it all – that’s what those compartments are for.
Posted by Ace Toscano at 6:59 AM

I carry a piece of "magic eraser" to clean my shaft.
It cleans the Ferrel like new.

"You hit the ball on the wrong angle."
Pat Flemming.

Thanks for participating this month! Ace's Case :)

Hope you will do it again.

Great 1st post, Ace. I hope you'll join in with us regularly. I wish I could have seen the guy's face when he turned the chalk over and saw your name. Cool.

Just like Marty I carry a piece of "magic eraser" to clean my shaft. (ha- ha).

Love your blog by the way (: