The Me In Team

I don’t usually spend a lot of time thinking about the individual point standings of our local bar leagues. First of all, I never bring my reading glasses on league night so I can’t read the sheets. Plus, I’m not that conscientious about reporting to the scorekeeper every five or six ball run I make – if I miss a shot or fail to run out, everything that’s happened before often gets wiped from my mind.

None the less, because one of my teammates kept reminding me that he was hot on my heals – he trailed me by a scant six points with six weeks left – I knew I was leading the pack on Monday nights and wasn’t at all surprised when I finished in the number one spot.

Wednesday nights was a different story. Based on my own observations, I hadn’t played very well the last session – I hadn’t won enough games or made enough runs. So, when the captain of my team called explaining that the player who had been in the lead had had a bad final week scoring just six points and that both he and I had leapt past him in the standings, thereby finishing one two, I had a hard time believing it. But, it turned out to be true as the first place trophy on my shelf attests.

And to cap things off, my partner and I came in first in the blind-draw scotch doubles tournament that followed the trophy presentation at the league’s party.

This is small stuff, I realize, but being number one in both leagues is a kick, especially, at this stage of the game.

Here are some pics from the Wednesday night party at my team’s home bar, the Hayloft: 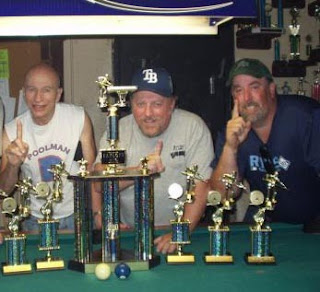 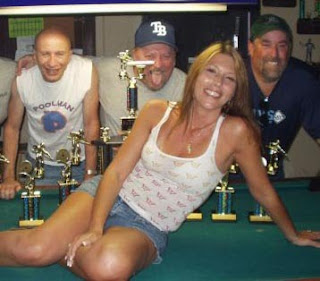 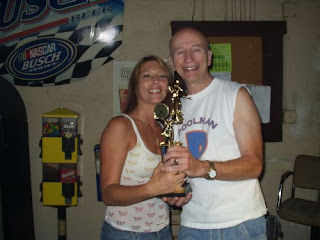 Sandi presents me with SharpShooter Trophy