A Night That Will Live On In Infamy 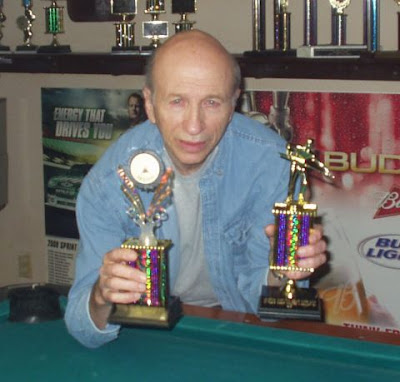 Sure, it was only a little roadside bar, and a relatively insignificant match in our local bar pool league involving me and seven other nits, none of whom will ever be found in the annals of History’s Who’s Who; still, for me, what went on there that night was an offense for the ages, on a par with the infamous Black Sox Scandal, or the Tanya Harding plot to cripple Nancy Kerrigan. It was cheating, plain and simple.

Ironically, the evening began with a rather heated argument over whether or not we would use two tables. They, in a hurry to get done, wanted to play on two. We, usually, preferred to let the match proceed on one table so that we could be more involved with each other’s games. According to the league rules, two tables could be used only if both teams agreed to it. We didn’t, so that was that. They moaned and cried and asserted that we didn’t have to get up in the morning for work, like they did. That, of course, was untrue.

Anyway, we played on one table. It was ironic because when the critical offense occurred, rather than observing the events and being involved in my game, my teammates were rapt in a discussion of a topic totally unrelated to pool, leaving me to fend for myself. Thank you very much.

Cricketers’ team was made up of one chick and three guys, one fat, one skinny, and one tattooed. The transgression occurred while I, representing Boondocks, was playing the chick. I had run out to the eight ball, leaving myself a cross-side bank which I stroked very softly. It hit off the tit and came to rest about an inch above the side pocket, an eighth of an inch off the rail. She had four or five balls left, so I was expecting her to miss, giving me another shot. But, she ran out to the eight, leaving the cue ball just about dead center of the head-end half of the table.

I’m thinking she can try to cut it along the rail into the corner – a hard shot, or she could try to bank it into the side or the corner. The corner bank looked like the safest bet to me because, if she missed, she still had a good chance of leaving me tough.

At this point, she looked across the partition that separated the pool table from the bar area and started conferring with her teammates. One of them, the skinny guy, walked around to the table. He took up position by the side pocket with his left side up against the table and his back toward me. I was immediately suspicious. Obviously, the chick did not care for the obvious options – she didn’t want to cut the eight along the rail, and she didn’t want to bank it. She wanted to play it into the side pocket. Unfortunately, the way the eight was sitting, it wasn’t going to go into the side pocket. No way.

I got up off my stool so I could see exactly what skinny was doing. Some people believe that if you depress the point of the side pocket, it will remain depressed to some extent and give the shooter of a shot like the one the chick wanted to make a little more room. I thought this might be what skinny had in mind. Nope. I was giving him too much credit. As I watched his hands dancing here and there all around the eight ball, it became immediately apparent that he wanted to move the ball. It wouldn’t take much, a quarter of an inch would have done the trick.

I turned to my teammates. “Hey, are you guys watching this?” I called. They weren’t. I didn’t dare take my eyes off skinny for any amount of time, so I moved to the foot of the table to make sure he knew I was watching. He said something to the chick, then turned to the fat guy who was sitting on the bar side of the partition. Then he left, at which time I returned to my stool. Fat boy apparently decided it was time for him to assume control of the situation because, now, he got up off his wide ass and waddled around to the table. He assumed the same position skinny had been in, thereby screening me from the eight ball and his numerous gesticulations. Of course, now, as a result of his ample girth, even more of the table was hidden.

“Are you guys f__king watching this?” I again appealed to my teammates. I think this time I actually diverted their attention, if only for a fleeting second.

Meanwhile, the fat boy was determined to succeed where skinny had failed. Then, bang, his hand contacted the eight ball and sent it across the table. I, immediately, jumped up and swept the balls aside and said to the chick, “Game’s over. You lose.” They were offended. Can you imagine? The freaking cheating bastards were offended.

“You’re a bunch of f__king cheats,” I declared.

I didn’t know what was going to happen next, and I didn’t care. My teammates, who might have caught the last few seconds of the episode, were, now, offering their opinions on how things should play out. I, who had watched the entire show which must have gone on for five or six minutes, wasn’t allowed any input. Finally, the cheats from Cricketers were mollified when one member of the team, the co-owner of Boondocks, apologized to the chick, explaining that he knew the movement of the eight ball was an accident and assuring her that he knew she and her teammates would never cheat. I couldn’t believe my freakin’ ears.

So what did this make me? A crazy old man? A bullshitter? A liar? I didn’t care. Though we eventually won the league championship, and I finished second in the league in individual points, I informed my teammates that I would not be a part of their team next session. It was a matter of honor. If I tell you someone’s a freakin’ cheat, take my word for it, don’t apologize to them.

In another bit of irony, a friend of mine, who was having a feud with our league operator, decided to start a rival Monday night league. He tried to get the other teams in our league to join him, but only succeeded in wooing two teams, both from Cricketers. Good freakin’ riddance, I say.
Posted by Ace Toscano at 6:42 PM

I admire someone who stands by their principles and won't play with a cheat. Good for you.