Season 1 - The Hustlers: A Review 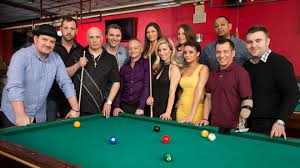 Take some hot chicks who also shoot a pretty decent game of pool, make a reality show about them and it would seem you have a recipe for a hit show, at least a cult classic, and a show that could give the grand old game of pocket billiards a much needed shot in the arm. But, then you add some representatives of the male gender, representatives whose behavior should not be condoned in any pool room and certainly should not be broadcast on television where it might influence the behavior of people just getting into the game. Loud mouths, bullshitters and whiners who make unsportsmanlike conduct, sharking and downright cheating an everyday part of their games - that's just what we need more of. Knowing the popularity of the show among local pool players, I know it's only a matter of time before these yahoos start mimicking Gary, Ross and Finn. Oy vey!

Is this really doing the game of pool any good? I don't think so.

The only participants who manage to escape Season 1 with their honor in tact are Jennifer Barretta, Mike Dechaine and, though up to now she's played only a minor role in the show, Yomaylin Sanchez.

Amusingly, the season finale ended with Emily Duddy proclaiming that maybe now the other players would start taking her seriously. Why, because she won a couple matches after being spotted 5 games on the wire, plus the five ball? Sorry, maybe not that seriously, yet.
Posted by Ace Toscano at 6:43 AM