Reaching Out: A Stroker Smith Adventure by Ace Toscano 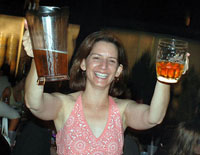 This place was a huge step up from Dirty Harry's. As a procession of young women, full-flowering beauties, crossed his path, it occurred to Stroker that the joint was aptly named. The Beer Garden. One barmaid carrying three frosted mugs of lager, a fishbowl sized margarita and a basket of wings brushed against him and smiled as she made her way to an opening that led outside. It was a cool night, perfect for sitting in the open air. The bar buzzed with joy and good times and he was immediately happy for Peggy O'Neil. She deserved to work in a place like this.

She had tweeted that she'd be working, tonight, inviting her friends to come on by to "partay," and, although he realized her tweets were meant for a younger crowd, he wanted to check things out as well. He'd gone from seeing her three or four times a week to not at all. He missed talking to her. He missed seeing her. He missed her. He wanted to know how she was doing. Besides, there were a couple things he had to ask her. Like, why had she left her job at Dirty Harry's so abruptly, without notice? And why, after five sessions as his teammate, had she felt it necessary to drop out of pool league, too?

She had glossed over her reasons, on facebook, in sketchy terms, but he needed some specifics. Mostly, he wanted to know if Hughie was involved. Hughie, the terminally useless son of Dirty Harry, liked to refer to himself as the day manager, since it gave him an excuse to hang out at the poolroom in the afternoon and lust after the barmaids who worked days. Stroker was a regular at Dirty Harry's and it was his habit to relax at the bar for a couple hours following his practice session, reading a book while he nursed a beer or two. From this vantage point, he had come to know all he ever wanted to know about Hughie and his lecherous ways. But, he had allowed himself to believe that Hughie's depraved longings were manifested in drool alone and that the useless twit was basically harmless. Now, he had reason to suspect he had been mistaken.

They had been book buddies, Stroker and Peggy O'Neil. He being an avid reader, and she being a dedicated Dean Koontz fan, they always had something to talk about on days she was working. Right now, in fact, he was delivering for her perusal Koontz's latest graphic novel, Odd Is On Our Side. It would be his way of telling her that, though she had moved on, their book exchanges did not have to end.

He stopped short of the bar and watched as she chatted it up with a couple young guys while she drew their beers from the tap. She must have sensed him staring at her because she glanced left and spotted him. She seemed happy to see him. He was relieved. He had worried about invading her privacy, but that, evidently, was not the case because out she scooted from behind the bar with outstretched arms and enveloped him with a rib crushing hug.

That was Peggy. She'd always been an outgoing, openly affectionate kind of girl. Unlike, for instance, Donna, another one of Harry's girls who worked Tuesdays and Sundays. A quiet girl, working two jobs to support herself and her three kids, she had once confided to him that she didn't believe in hugging customers, even if it might lead to bigger tips, because she wouldn't want to give anyone the wrong idea.

Donna, also a reader, was into the Kay Scarpetta novels which was why Stroker was constantly on the lookout for them, he had a checklist in his wallet, when he toured the local used book outlets. Just the other day, he had found a signed copy of The Last Precinct at a church rummage sale down in Hudson. He had presented it to her earlier this day. She had thanked him, politely, of course, but without the enthusiasm he had expected. Something was bothering her. From her body language, it occurred to him that her despondence might be connected to Hughie's looming presence. Then, he noticed the bruising around her wrists. When he had asked her about it, she just shook her head and said it was nothing.

"It's gotta be something," he had said.

"She said it's nothing," barked Hughie. "Donna give him a picture so he can go home and whack off. You're a pervert, you old fuck."

Though a rather large young fellow, mammoth by most scales, Hughie's brain was about the size of a pea. Accordingly, he thought the only possible interest one person might have in another was carnal.

"It must be frustrating, Hughie, hitting on all these beautiful girls and always getting turned down. I can't understand it. Harry's a good-looking guy. How come you're so ugly?"

Hughie just glared. He would have liked to throw Stroker out on his ass, but he couldn't. The dim-witted "day manager" had tried once to give Stroker the boot rather than pay up on a super bowl bet. But he had been overruled by Harry, thereby establishing to everyone that Harry's idiot son was the manager of nothing and his only true functions were to look stupid and bother the girls.

Peggy guided him to a seat at the bar and they caught up while she worked. It was like old times. When he finally got around to asking her if Hughie might be the reason she had left the poolroom so abruptly, she said she really couldn't say since it had been Harry who helped her land this job at Donte's and she had promised him not to talk about her prior employment. Of course, that was all the answer Stroker needed.

Now, he was beginning to see the recent string of sudden departures, all attributed to extreme unreliability - Linda, Kim, Sharon, Carol, Dawn - in a different light, a light blackened by Hughie's hulking shadow.

Donna was a much better person than he was. Stroker couldn't imagine needing a job so badly that he would put up with one second of Hughie's bullshit. No fucking way. But, he didn't have kids to feed. Remembering the red rings around her wrists, his brain raced through a dozen murderous scenarios.

Huey didn't show on Sunday - he was probably too hung over from Saturday night, so, he and Stroker didn't cross paths till the following Tuesday. The encounter proceeded normally with Donna and Stroker discussing the books they were reading, Hughie becoming jealous because she was ignoring him and, consequently, spewing off some unflattering comments regarding his rival, the 65-year-old Stroker.

"Stay home and dial up a 900 number, then you won't have to drive all the way up here to bother Donna."

Stroker just stared back at the imbecile.

"He's not bothering me," offered Donna. Stroker appreciated it because it was so against her nature to speak up.

"Don't fret, Hughie," said Stroker. "Sooner or later some skank will wander in here who's so drunk and so desperate that she won't care how ugly and stupid you are."

That comment brought laughter from a few of the old timers who were sitting at the railing watching a heated one-pocket match between Charley Shantz and that young kid from Hawaii whose name no one could pronounce.

"Like I said, that's the way I would go if I was ugly as you. Reduce your frustration."

Hughie had had enough. He came storming around the bar, vicious intentions smeared across his face. Stroker hopped off his stool and was ready for him.

"Get out," he commanded, punctuating his words by poking Stroker's chest with his index finger.

"I'm warning you, Hughie, do not touch me a-fucking-gain."

But, Hughie couldn't stop himself, now. He drove his point home one more time.

It was a practiced move that Stroker had used back in the day - dropping down, practically freefalling to one knee and then, before Hughie had the slightest inkling of what was about to happen, throwing a vicious uppercut to Hughie's scrotum, driving his nuts up to his throat.

Now, the plan had been to hop to his feet then whip around 360 catching Hughie on the side of his head with his elbow. But, Hughie foiled those plans by freezing in the doubled over position. As Stroker sprung to his feet, the back of his head, with considerable torque, caught Hughie flush in the face. There was an unmistakable cracking of bones and Stroker feared the worse for Hughie's poor nose. The momentum threw Hughie back on his ass and he remained on his ass as he frantically slid backwards in full retreat.

"Now, I'm only going to tell you this once. Get the fuck out of here, Hughie. I don't want to see you here again."

Hughie, his hand holding his nose, made a series of noises.

"He said 'he works here,'" one of the onlookers translated.

"He said something about his father."

"Your father can manage without you. Now, get the fuck out before I finish what I started."

With that, Hughie scrambled to his feet and fled through the back door.

It took a few minutes for things to quiet down. When they had, Stroker climbed back onto his stool, sipped his beer, and then asked Donna, "Have you ever read any Lee Child?"

THE END
Posted by Ace Toscano at 8:34 AM