The Pendulum Stroke: No Can Do

Once again, in exchange for polishing his shoes, the warden has given me access to his computer so that I can contribute to this month's edition of PoolSynergy. You can find links to all this month's posts here on the Pool Student's Blog. Now, let's get on with it.

It makes so much sense, the modern pendulum stroke - back and through, back and through - that it, no doubt, should be the foundation of every serious pool player's game.

It's rather simple, in theory. As you take your stance, with the tip of the cue just shy of the cue ball, your forearm should be straight up and down. From here, you draw the cue back then propel it (or, in pendulum language, "swing it") forward and through the cue ball. No unnecessary movements, just a simple, repeatable pendulum motion.

I've had this method explained to me by veteran players in the pool room. I've read about it in books. And, I've come across it on countless internet sites. Here's a blurb from a section on the stance at billiards.com: 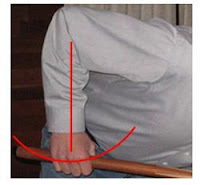 The back arm or more specifically the back hand placement on the cue is critical to your success. The correct place to grip your cue is the place where a line drawn from your elbow to your wrist points straight down to the floor. This is the hand position you want when the tip of your cue is within an inch of the cue ball. This pendulum thus created (elbow to wrist) can move freely forward and backwards. It also allows your bicep and triceps to be completely relaxed, until you take your stroke. It helps to practice this by getting in a shooting stance without a cue. Swing your elbow forward and backwards without dropping your shoulder. Relax your elbow while holding your shoulder firm. Gravity will show you the natural point straight down. You have created the pendulum.

Here are some pictures I found of players who have adopted this same form of address. Note the perpendicular position of their forearms. 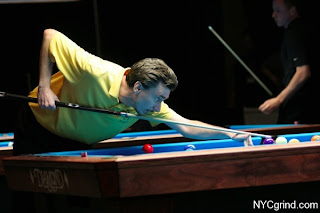 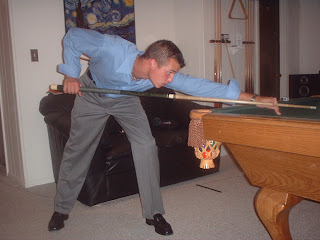 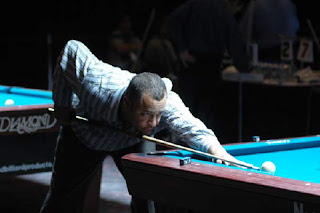 Oh, if only this method would work for me. I'm telling you, I'd be one hell of a player. I mean, in theory, nothing is more important to your game than a straight and dependable stroke. And don't think I haven't tried it. I have - in countless practice sessions and at home leaning over the kitchen table with cue in hand. But, try as I may, I can never get the desired pendulum action to manifest itself in a straight and true stroke.

I guess the problem is I'm just not comfortable with it. Back when I learned to play, back in the 1960's, no one was espousing the pendulum method. Sure, people were using it - my Uncle Nicky, the best player in the town of Dover, NJ, was a stellar proponent of the pendulum stroke though he probably didn't know it by name - but it wasn't the prescribed way of stroking. In fact, the only guidance I ever received on the subject was from Mosconi's little red book, "Willie Mosconi on Pocket Billiards." Though Willie did speak of a pendulum action, meaning, I assume, straight back and straight through, he also included this dictum in the section on Follow-through:

... the player is in the same relative position at the backward and forward points of his stroke. At the backward point of the stroke the hand points down to the floor at approximately a right angle. At the forward point in the stroke, the shoulder is in about the same position: the elbow has dropped slightly, and the wrist moves forward. The cue is held as level as possible.

My friends and I read Mosconi's book so many times we could recite certain sections verbatim. And we studied the pictures in fine detail. As for me, when I stood at the table, I felt exactly like Willie looked in figure 7, if you know what I mean.

Here'a a picture of Willie addressing the cue ball. Note the position of his arm. 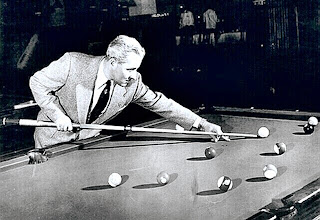 Obviously, to follow through from this position requires coordinated movements of the elbow, wrist and hand, much more complicated than those connected with your basic pendulum stroke. Still, somehow, back in the day, I managed to harness this piston like motion producing a stroke that was uncompromisingly straight in all situations. Unfortunately, after a 38 year hiatus from the game, the movements involved proved too intricate to recreate from memory. Hence, my current systematic lack of a coherent stroking philosophy.

Finishing up, I must note that, while Willie's method seems contrary to those currently espoused, you have to remember that he was primarily a straight pool player who sailed through racks with an economy of movement of the cue ball. Understandably, that required more finesse and touch than nine-ball, a game that often necessitates a more open and free-stroking approach. Now that I think of it, maybe that's my problem - I'm trying to survive in a nine ball world with an outmoded straight pool stroke.

I agree with you! There isn't any theory of playing billiards! Just play the way you are most comfortable!

theories do help at times and people can depend on it. although it won't be as much enjoyable if one keeps on thinking about them.

I tend to agree with you that straight pool demands more finesse, and thus, a stroke that accommodates the game. In 9 ball I have found that I frequently travel three rails to make shape on the next ball. One method I have adopted in straight pool is shortening the distance between the ball and the bridge: which forces me to take a smoother and shorter stroke and limits the power exerted on the cue ball.

Wow great article, I really don't know if hand position has really something to do in playing because the only thing I know is you should be a sharpshooter.

I think the problem in any pool stroke comes with the amount of pressure on the hand holding the cue when stroking. Most of time I see and pressure change at the moment of the stroke, especially when the shooter is not sure he can make the object ball, or when the shooter strokes the cure harder than the normal stroke. I think you should pay more attention to the grip pressure. Try that in practice.

I think theories could really help us to know more about this game and have additional idea on it. I think hand position is important but the most important is you enjoy what you are doing. Anyway, you really have a great article.