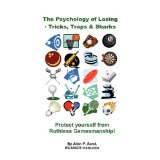 Allan P. Sand is a man after my own heart. He’s written a book on sharking, a guide to protecting yourself from ruthless gamesmanship. Now, I’m pretty well known, especially around bars where players will do anything short of jumping jacks in your line-of-sight to distract you, for calling people out for their sharking moves. Strictly speaking, according to my definition, if you aren’t sitting still, by still I mean motionless, and quiet, by quiet I mean completely silent, you are engaged to one degree or another in sharking. There should be no asking about the weather, no striking up a conversation with other people in the poolroom, no whistling, no humming, no tapping your stick on the floor, no “nice shot”, no nothing. Of course, I’m often disappointed by the deportment of my fellow competitors.

Maybe, I spend too much time thinking about the topic. In the preface to his book The Psychology of Losing - Tricks, Traps & Sharks

, Sand advises “It is important to be aware of situations where psychological tricks and traps can be applied. Being alert helps you minimize and counter their affects. Don't obsess about it, just accept the facts that these attempts are being used by everyone, whether on purpose, or unintentionally.”

Though I’m confident that I generally know when sharking is going on, and I’m quick to point out each individual offense, the task of categorizing the myriad of ploys that qualify as sharking is beyond my analytical abilities. Thankfully, Sand has taken on the monumental task and succeeded. Here, he has broken down sharking into 70+ variations. As I read through them, I found myself remembering again and again instances from my own experience.

Take, for example, his first subcategory “Accusations.” To show you how successful my opponent was in knocking me off my game, I’m still seething over an incident that happened three or four years ago. I was ahead in a local 9-ball tournament match when my opponent started complaining about my racking, claiming that the one-ball had to be dead-center on the spot. I was so pissed off that eventually I told him to go fuck himself and walked out without finishing the match. Not the response that Sand recommends but I did get considerable satisfaction blogging about the experience. I even wrote a poem, A Nit With No Name, about my opponent.

Obviously, Allan P. Sand has put a lot of time and thought into this book and we should be glad he did. I recommend it to all serious players. It’s analysis of sharking moves and suggested responses should be an invaluable asset to your development.
Posted by Ace Toscano at 5:25 AM

I really enjoyed your article. Keep up the honest open minded thought. It is nice to read something that sounds like a lot of people are thinking but they do not say. Keep up the good work.