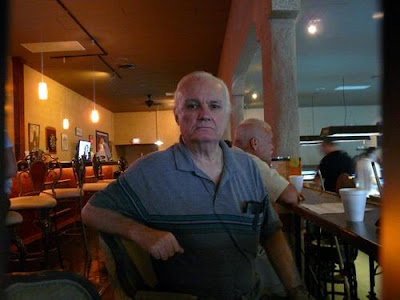 I heard, today, that Bob May, a fixture in our local Pasco County pool scene and a friend to many in the New Port Richey area, has passed away at 75. Bob’s health had been declining for several months but he battled bravely till the end. Originally from Wisconsin, it was his wish to be returned to his native soil, as cold and as lonely as it is up there.

Bob enjoyed playing pool and could be found many afternoons banging the balls around at Hammerheads or DJ’s. When he could, he liked to travel down to Stroker’s on Wednesday nights to play in their regular open 9-Ball tournament. Not long ago, he emailed me telling me he had finished in the money the previous night, scoring victories over Dave Williams and Donny Mills enroute.

Some time ago, I published Bob May’s One Rail Kicking System, here. I’m glad I did. Not only because Bobby got a kick out of it, but, since he always enjoyed sharing his knowledge of the game, it’s a fitting remembrance.
Posted by Ace Toscano at 11:38 AM

Bob was a great guy and many will miss him. I called him " Mr Devious " in reference to his 8 ball strategy. So long Bob.
Charley

I'm sorry to hear about your loss. I just wanted to let you know I've been reading your blog for a while. I just saw a poll on www.pooltables.com where you vote on your favorite trick shot video and in return, you can win a free pool table. The contest has some sweet shots. I voted and thought this was cool and wanted to let you know about it in case you think some of your other readers might like it. You should check it out and see what you think. Maybe one of us will actually win the table : )