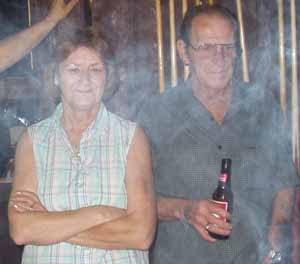 I only see him once a week at The Barn, where we regularly gather for the Friday night eight-ball tournament, occasionally twice if I make the trek down to the bowling alleys and he happens to show up there, and I’ve never known Tommy to lose his temper. Though well past his prime, there’s a bigness about him across the shoulders and through the chest that hints that once upon a time he was a monster. Still, he’s an even tempered, mild mannered guy. And you might not be able to detect it from his appearance – he has a long scraggily yellowish beard that is often parted by his cue when he takes his stance over the balls, though bald on top the hair on the sides and back of his head is usually gathered into a ponytail, and he has a belly that a scrawny department store Santa would die for – but, he can play a pretty decent game of pool. If I had my druthers, I, personally, would prefer not to draw him.

Other regulars at The Barn include Sue and her husband Bob. Dee, who plays and runs the tournament, and her husband Russ who no longer gets in because of his eyes but who provides moral support and manages the break pot which requires his constant vigilance. Steve, Tony and Bogie, my pool league teammates, also show up more often than not, as do several others who hang out at The Barn and have nothing better to do on Friday nights.

We can usually count on some entrants from the local pool rooms. These folks come because their common sense tells them that they should beat the crap out of us and steal the pot. Eddie Galagher came all the way up from Tampa a couple weeks in a row last fall but never got into the money. Funny thing about that was I know him from the pool rooms, so, when I saw him I said, “Jeez, Eddie, it’s kind of a long ride out here for you, isn’t it?” “No,” he snapped back, “I live just down the road.” Guess he didn’t want anyone to know he was going out of his way to rob us. He could have skipped the subterfuge – folks at The Barn don’t generally care where you come from or how good you play. Hell, Johnny Ravellis comes all the time and he’s won a couple tournaments on the Florida Pro Tour. Him and his girlfriend, Candy, are well-liked by all the regulars and we couldn’t care less if he wins or loses. Thing is Johnny R. and Candy are sociable people. Eddie Galagher isn’t. So, if the locals didn’t warm up to him, it’s probably his fault.

Paul Wiseman’s been coming the last couple of months. He tries to be sociable, but, like Eddie, he spends too much time crying about the bar’s rules which run counter to what he’s used to in the poolroom. Basically, there’s no safety play and with every turn you’re expected to make an “honest effort” to pocket a ball. Admittedly, it’s a crazy rule, yet it’s this very rule that makes it possible for average players to rise up and beat the likes of Eddie Galagher and Paul Wiseman.

Well, it just so happened, last Friday night, that Tommy and Paul Wiseman locked horns in the hot-seat match. Now, playing Tommy as often as I have over the years, I can tell you that he is not a cheat. At times, however, when the situation warrants, he can be extremely careful. And, as you might have guessed, a situation calling for extreme care did present itself in the match between him and Wiseman. Having been left in a tight spot, Tommy played a shot and missed, leaving the cue ball in a spot that was not advantageous to the prospects of his opponent. “Well, hell,” I often say at moments like that, “you can’t expect me to play position for your ball!”

Paul Wiseman saw things differently. After trying an extremely hard kick shot and missing, thereby selling out to Tommy who ran out, he approached Dee and lit into her about the rules and telling her we should play ball-in-hand since everybody plays safe anyway. All she said was “Those are our rules.” I could’ve told him my interpretation of “honest effort,” but at that particular moment I didn’t think he’d be receptive.

While Wiseman was continuing to smolder, yours truly was working his way through the loser’s bracket and, as fate would have it, Dee finally called the match for second place, “Ace & Paul.”

I have a reputation for making the eight on the break – a couple weeks ago I made it two games in a row – and I would’ve loved to get a crack at it now, but, unfortunately, I lost the flip. Paul broke and sent the cue ball flying off the table. I took ball in hand behind the head string and proceeded to work my way through the stripes. Try as I might, I couldn’t manage to get a shot at the nine or thirteen and, thereby, relinquished my turn. Paul came to the table with his balls all broken out. A run-out seemed a sure thing. He pocketed his seven solids in quick order, but missed position on the eight when the cue ball came to rest right up against it heading straight at the rail. He gave it an honest effort trying a bank but missed. Unluckily, for him, the eight then came to rest right up against my thirteen ball, which meant, if he got another turn, he most likely would not have a shot.

Here’s what the table looked like from behind the head rail. On the right, about halfway between the near corner and the side, six inches off the rail were the eight and thirteen in tandem with the eight nearer to the side pocket. My nine ball sat about 4 inches off the head rail, about a half of diamond to the right of center. The cue ball was sitting halfway down the table on the right just out from the side pocket.

Now, my options, as I saw them, was either to try to bank the nine ball into the corner and draw the cue ball into the clustered eight and thirteen, or I could try to cut the nine ball along the rail sending the cue ball off the rail and into the cluster. Admittedly, the second option was a surer way of breaking up the balls, but the odds of me making the shot were very low. So, I took option one. Unfortunately, I missed the bank and, rather than draw back, the heavy bar cue ball stopped dead.

From this position, Paul could still see part of the eight ball so he decided to bank it cross-side, coaxing it along with some right English. Unfortunately, the cue ball did not get out of the way, the eight double-kissed it, and it flew emphatically into the far corner. Game over. Paul slammed his stick down, threw the balls around, and without as much as a fare-thee-well raced out of the premises.

Tommy, who had been waiting to play the winner of the game, sat there shocked. “He didn’t even shake your hand,” he said to me.

“I guess he was pissed at me for not breaking up the balls,” I said.

I beat Tommy, who was obviously distracted, in the first game of the finals, then suggested we split first and second. He agreed and that was that. Good sport, that Tommy, and a gentleman.
Posted by Ace Toscano at 7:13 AM