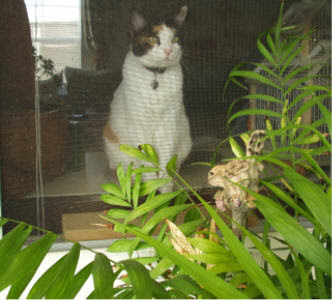 I haven’t been thinking about pool much for the last few days. I’ve been busy taking care of my cat – she’s dieing.

My wife named her Katie, after Katharine Hepburn, more than 19 years ago when we adopted her from an animal shelter up in Kalispell, Montana. According to the adoption papers, her former owners had been calling her Zippy, a name, we were to learn later, that was quite appropriate. They also had noted that “she bites” which was also true, though, over the years, her biting most often made me laugh rather than cry out in pain. And, they claimed, six month old Zippy ate too much.

We originally acquired Kate in hopes that she would be a companion to our male cat, Jimmy. Helen had done some research on the matter of cat compatibility and she believed it would be more advisable to get a female than another male. Advisable or not, it didn’t work out – Jimmy just didn’t take to the competition. At best, he learned to tolerate her. I wrote more about those times in my short story The Story of Jimmy, A Native Montanan Cat.


Anyway, Jimmy passed away in 1997, and we’ve been a one-cat family ever since. Some time later this year, Katie was due to turn 20. In cat years, that would be 92 – quite an admirable achievement. As is, looks like we’ll have to settle for 90.

Up until just recently, she’s been her old zippy self, racing around the house, taking flying leaps from the stove to the top of the refrigerator to the top of the kitchen cabinets. Reminiscent of the times long ago when she and Jimmy used to wander into the garage late at night and leap from the cab of my pickup up into the rafters where they would sleep on a plywood platform I had built for them until they heard us stir in the morning. Then we would hear them thud, one at a time, back down onto the pickup. Oh, where has the time gone.

I’m not ashamed to say I love my Katie. I cherish all the times she sought me out for the warm comfort of my lap. I know there are those who might say she’s only a cat, but that school of thought doesn’t register with me. She’s my cat and I won’t soon get over losing her. 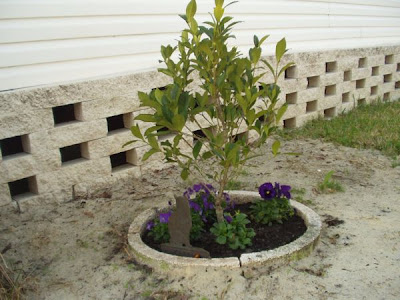 Aw, I'm so sorry about your cat. I try to say I don't love them but I really do. My mom and dad have 5 cats. One of them I stole from them. I'd be awfully sad if something happened to them. Best of luck with everything.

Thanks for your kind words.

Sorry to hear about your cat. I know the feeling. Our Pug, oddly enough also named Katie, died about 6 months ago. I can't have a piece of bacon without thinking of her.

She used to do tricks for a piece, and once, when she got impatient waiting, she ran through her entire litany of tricks back to back as if to say "there, can I have my damn bacon, now?" Man I miss her.

John, I guess losing a pet is something many of us have to go through. I'm sure there are a lot of pieces of bacon in the days ahead. I can't believe how empty my home feels. Our Katie used to like to sit on my lap as I typed on the keyboard. Not the best thing for my eyes, sitting so far away from the monitor, but I went along with it because she liked it. :(

Ace, Katie was blessed to have you as her caretaker.
I think she is smiling down (from Montana skies) thinking that you should visit.. soon!