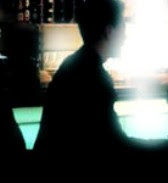 No one said it was going to be easy – keeping my resolution to be more tolerant in 2009.

First came that old jerk-off who spilled a tray of balls on table number four at DJ’s. What an asshole! Then, last night, during our Boondocks team's first pool league match of the new year, I was put to the test again by the team from Cricketers in Port Richey.

In my first game of the night, I was playing this girl, the only female on their team. I missed a bank on the 8-ball into the side pocket and the eight came to rest about an inch beyond the side pocket and about 1/8” off the rail. My opponent managed to run out to the 8-ball, leaving the cue ball approximately in the center of the head end of the table. To me, it appeared she had three choices – she could try to cut it in the side (a shot I thought I could have made), she could try to run it down the rail to the corner, or she could have banked it cross side or cross corner. This is my frame of mind as she calls one of her teammates over to the table and confers with him. After a few words, he walks around the table and positions himself between me and the side pocket, screening me from the 8-ball. I get off my stool and lean out far enough to see what he’s doing. He’s making a lot of unnecessary hand gestures in close proximity of the 8-ball. My first thought is that he was going to put his hand on the point of the side pocket and depress it. Some players believe that this can give you a little more room on shots like this. However, I was giving them too much credit. Their plan was to move the 8-ball enough to make the shot into the side simpler. Despite all his gesticulating, her teammate punked out and called on a second teammate to take his place. He took up the same position, screening me from view, and I, again, was forced to leave me seat to see what he was doing. He continued the same tact, talking with his hands, moving his fingers all around the ball. When his critical move came, he was trying just to nudge the ball a fraction, he applied too much force and the 8-ball moved 3 or 4 inches. By then, I’d had enough. I went to the table, pushed aside the cue ball, and grabbed the 8-ball, declaring the game over. They bitched and I called them “fuckin’ cheats.”

That’s about as tolerant as I can get.
Posted by Ace Toscano at 5:12 AM