Farewell To The Tennessee Rambler

Last Saturday, July 6th, men and women of the cloth (the green cloth, that is, preferably Simonis) gathered to bid farewell to our friend and fellow pool shooter James. Five years away from his native Tennessee was enough and he’s now looking forward to returning to all the gang back home.

More than anyone else, James is responsible for what has come to be known as the Florida Barroom Tour. He not only found the tournaments, some in little hole-in-the-wall beer joints, he also spread the word.

He’s made a zillion friends down here all of whom are now lamenting the fact that tournaments will never be the same – not as lively, not as enjoyable. He leaves here owing no one, but being owed by everyone. That’s just the kind of guy he is.

Below is a portrait of James at the party as he studies a game in progress. In the background is one of the many admirers who attended the soiree. 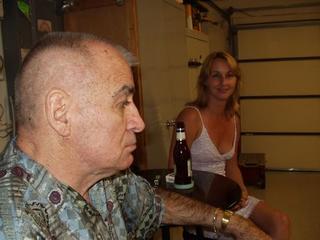 The party was hosted by Chris and Jim. Chris and James have been on the first place team in their pool league the last few years. I’ve had a few rule and procedural disputes with her at tournaments and therefore have always avoided contact with her or her sharp-shooting spouse. However, they proved at the party, once and for all, that they’re much better people than I am. Not that that’s anything to brag about; the way I figure it, three out of four people you pass on the street are better than I am. Check that - my wife says it's more like 99 out of a hundred. Anyway, in their case it is significant - they are much, much better and nicer. The party was great. We had a little tournament in the garage - I think I came in third – and I hear that some of those straight-shooting animals were still pocketing balls at four in the morning, long after the older fellows were home and in bed.
Posted by Ace Toscano at 3:05 PM